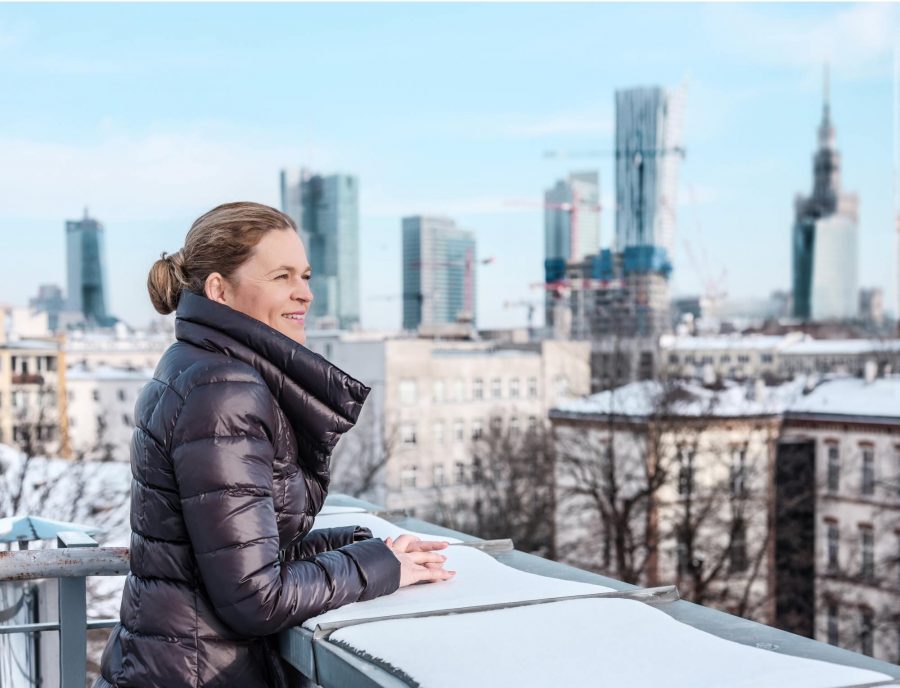 Barbara Nowacka, 43, is a Polish politician and activist. She is also one of the prominent initiators of a pro-abortion bill “Save the Women”, which rejection by the Polish Parliament triggered the mass pro-abortion protests, known as Czarny Protest (Black Protest).

1975: Barbara was born in a family of intellectuals. Her mother is the political figure Izabela Jaruga-Nowacka (who served in the national parliament and became deputy prime minister from 2004-2005) and her father Jerzy Nowacki is a professor.
1997: Becomes involved in politics. Over the years, she been a member of several leftist parties.
2004: Coordinates the organisation of the anti-globalisation demonstration during the European Economic Summit in Warsaw.
2011: Birth of her son.
2016: She initiated an anti-abortion bill “Save the Women” .

HISTORY OF WOMEN’S RIGHTS IN POLAND

1917: Women get the right to vote.
1993: Though legal during Soviet times, abortion is allowed in three cases – rape, endangered health of the mother or high probability of severe disability of the foetus.
2013: Paid parental leave for women is extended to 52 weeks.
2016: Initiated by the Polish Women’s Strike movement and supported by multiple feminists NGO’s, the Czarny Protests take place, following the rejection of the anti-abortion bill “Save the Women” by the Parliament and the attempts of the PiS party to ban abortion along with banning the morning after pill and introducing penal responsibility for women who would undergo an abortion.

You received the Prix Simone de Beauvoir in 2017 for fighting for women’s rights. How has the general public attitude towards feminism changed in Poland since the Czarny Protests?

10 years ago, if someone spoke about women’s rights they would be looked at strangely. During the Czarny Protests, many women started identifying with feminism. Their notion of solidarity changed. Women started feeling powerful and worthy; they felt responsible for the country they were a part of.

What makes the experience of Polish women stand out in the international movement for women’s rights?

Polish women are constantly fighting against a very conservative society, dominated by traditional [gender] roles that are imposed on them by a strong Catholic influence. Our fight for our rights is a reminder to women everywhere that nothing should be taken for granted. Back in the 1920s, Polish women got the right to vote, had access to contraceptives and there was an open discussion about abortion.

Flash-forward 70 years later and Polish women have lost their right to safe and legal abortions… Strangely enough, that happened in the 90s, a time in which the country was reclaiming its freedom.

So was it easier for women under communism?

Communism stripped people of many rights and freedoms. But since it had to seem egalitarian, women had easy access to education. Women working in physics, maths and chemistry often tell me how they used to be the only women at international conferences back in the 60s.

When did you start being active in women’s rights?

I grew up in a family who believe that change doesn’t come from waiting but from acting. My great-grandmother was the first press printer in Europe. That’s what I was told, at least. My mother [a minister who died in the 2010 presidential plane crash in Smolensk] was very brave and achieved many things. She was elected into parliament several times, started her own party and served as prime minister. Every mother influences their daughter. We often want to rebel against them, but we also want to be like them, which is my case.

What influence did working for the Federation for Women and Family Planning helpline have on you?

That job taught me to get out of my bubble and listen to other human beings. Women from all ages, as young as teens or even in their forties, would call asking where babies came from. We’d get calls from domestic violence victims. I learned how important it was to get help from others. I became so angry. Back then, in the 90s, people didn’t understand that domestic violence was a crime. And the state was helpless.

Then why did you decide to leave?

My mother was engaged in women’s rights, and when I started out I wasn’t sure I would feel comfortable doing what she did. In 1997, I joined the Labour Union Youth Federation Party and was a representative at the European Community Organisation of Socialist Youth.

It was an exciting time. Poland was preparing to become a member state of the EU. There were so many ideas flying around. My country was finally coming out of the poverty it experienced during the transformation period, and left-wing politicians started gaining ground. I remember the accession referendum. I was on Erasmus in the UK back then and I had to wait for three hours in line to cast my vote.

“I laugh when people say that women bring eloquence, art or calmness in public debates.”

So have your expectations been met?

I believe that joining the EU is the best thing that’s happened to Poland in centuries. We used to be a peripheral country, squeezed between two massive empires – Russia and Germany – and now we’re part of Europe where we’ve longed to be for ages. We’re safe and we’re developing so fast. Just look outside the window; there are so many buildings, roads, kindergartens… The EU is everywhere.

People used to need visas. They used to go through all kinds of trouble to exchange currencies. They used to wait three hours at the border. What are the limits today? 120 kilometres per hour on the highway, that’s all. From a closed homogenous state full of prejudices, we’re slowly turning into an open, multicultural society.

What it comes to the future of Europe, what makes you angry?

The EU has concentrated on its own well-being and the well-being of its elite while neglecting neighbouring countries. Especially countries that European and American corporations have exploited where factories pollute the environment. While they get rich, they produce cheap good for us and pay nothing to the locals [who work there]. We need to work on improving the living conditions in countries people want to leave. Freedom, equality, solidarity and well-being are values the EU is built on. They shouldn’t be reserved for a few countries, they should be globally respected.

At the same time, there are things tearing the EU apart. There is a fear of a lack of jobs and cultural difference. We need to integrate countries already in the EU better, and we need to pay attention to closed-off extremist groups. We can’t leave people like that to themselves. The same goes for Polish nationalists. The same goes for Muslim groups that rape their women and stop their girls from getting an education. It’s about human rights. When we let that happen because ‘this is their culture’, what is the point of democracy? The white, educated elite? That’s not the democracy I dream of. We need to fight stereotypes, educate [these groups] and dismantle them.

“You age much slower as a politician.”

In 2015, you were a candidate for the EU parliament. Will you run for the next EU elections?

You age much slower as a politician. When I look at friends my age working in the media or in business, they’re seen as wise and experienced. But a new generation is stepping up. And in politics, people pay attention to new generations, even if we already have grey hair. We laugh about it, but those who are truly young get angry and wonder if it will ever be their turn.

So I hope I still have a long way to go. I might run for the EU parliament again someday, but for now it’s time to act here [in Poland]. The country is at a crossroads. We need to rebuild democratic institutions and regain trust in the government. Either we’ll be a state with a proper justice system or we’ll become an authoritarian regime, closed off from the rest of the world. I would feel guilty choosing an easier and more comfortable lifestyle as an MEP.

Is there a difference between female and male politicians?

I laugh when people say that women bring eloquence, art or calmness in public debates. It’s not true! We each come with our interests and our own needs, and sometimes we have more determination to get things done.

Not many women in the 30s or 40s who are taking care of their babies or parents are willing to spend their evenings attending integration meetings at work. The political life of men is made up of endless meetings and discussions. That makes them more integrated and united than we are. While we’re busy getting things done, men concentrate on getting higher positions and more power.

Politics has also taught me that women demand too much of themselves. I’ve met many popular and successful men who show up at debates not knowing what they are about. But women shy away from speaking to the media because we feel like we’re not knowledgeable enough. We don’t ask for jobs when we aren’t qualified [but men do]. The world doesn’t work in our favour. The most important thing for us is to have the love of close ones and not to be afraid.

So from your experience, can a woman have it all?

And what does that woman want? Maybe she wants to have it all, maybe she doesn’t It’s all a matter of choice.

And what do you want?

Oh, everything. I want my cake and to eat it too. I just think you need to bake lots and lots of cakes, eat yourself silly and leave the rest for later.

That being said, motherhood has changed me a lot. My perspective has completely shifted. It’s not so much about myself but about my kids; about them growing up in a country where they can progress and feel safe.

What is the most pressing issue for women in Poland today?

If I had to rank them, I would say domestic violence is the most important issue. If democracy and human rights are the foundation of our beliefs, they need to start at home. If we are safe there, we can face the outside world. Domestic violence comes from the lack of respect for another human being. This is where I think education is key, and I don’t just mean an extra course in the curriculum. It’s about raising the next generation right, being respectful towards one another and not making an issue of their gender, age or race. A woman’s position in the workforce largely depends on how she feels about herself. What we’re good at doesn’t depend on whether or not we have a penis, it comes from our natural abilities.

Who are women’s worst enemies: men, institutions or themselves?

The patriarchy is our main enemy, and it’s supported by institutions and individuals who benefit from inequality. Religions, where there is a strong hierarchy. Autocracies. Of course there are also women guarding the patriarchy, watching over other women so that they don’t get too far. But our worst enemy is a patriarchal way of thinking, which tells us to reinforce negative stereotypes about the inferiority of women. We’re raised to believe we should keep quiet so that no one will think badly of us. But politics has taught me that those who think badly of us will do so no matter how much we try to convince them otherwise.