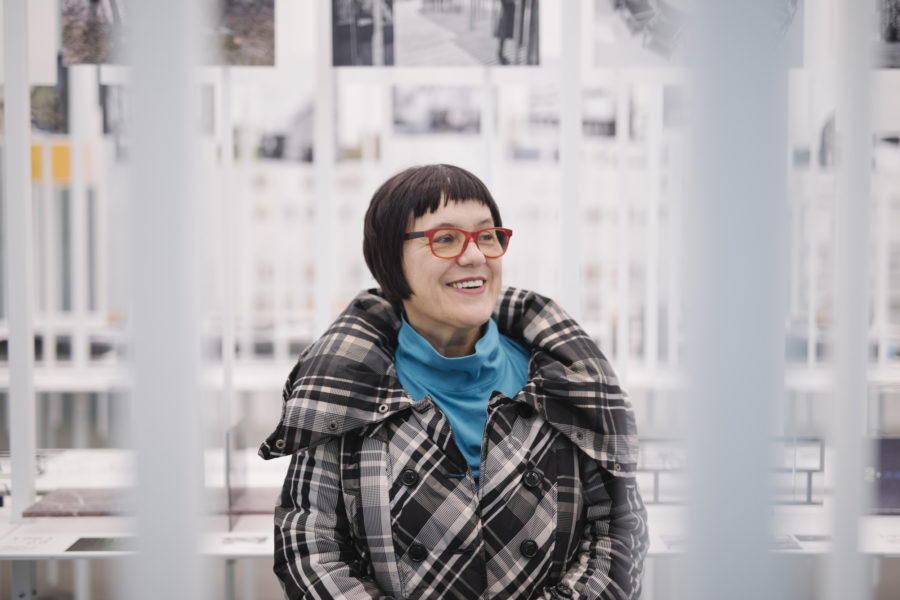 Vlasta Delimar, 64, is a Croatian visual and performance artist. For decades, she has been criticising social norms through the prism of her body, exploring a range of topics from femininity to motherhood to ageing.

To have created works of art uncompromisingly for 40 years, despite social norms and expectations… I take it you’ve felt both satisfied and frustrated?

At the end of a recent performance, which marked 40 years of my work, I said: “I’m a happy artist.” I can say this with certainty, because I’ve been doing what I like the way I’ve wanted to for decades.  I never considered artistic trends or sought the financial stability of a steady job. Instead, I decided to live modestly and freely. The most important thing has always been my satisfaction with my work. I’m proud to have made it so far.

The focal point of your work has been your body. That is, your elementary body, as you refer to it. The way it truly is. At the beginning of your career, why did you choose to express yourself through your body? Why have you continued doing so?

For me, the body is the most natural and sincere medium an artist can use. Especially a body without any clothes. A naked body doesn’t lie. I’ve always been interested in what we are when we take our clothes off, because our naked body is our truest image. The reflections of our inner worlds manifest themselves on our bodies. Disquiet, shame, fear, joy –– it all shows on a naked body. It’s a pure form, without social norms or connotations.

Your first nude performance took place in front of an audience with your then-husband, artist Željko Jerman, in 1979. Since then, you’ve continuously exhibited your own body. In this time, what has changed in your attitude towards your body? Both personally and as a performance artist?

I’ve known what I wanted to do since I was 15 years old. I wanted to make art, and I didn’t care what anyone else thought. That’s how it was with that first performance. Jerman had more difficulty in showing his body than me. My body hasn’t changed much since then, except the obvious things that come with age. My muscles are less toned, I’ve gained a few extra pounds, my face has lost its smoothness. But it doesn’t bother me, because I knew it was bound to happen. It actually makes me happy, the fact that I’m not always the same. I am my body, and I refuse to go against myself. So my attitude towards my body has stayed the same. The only thing I wouldn’t want is to be in a vegetative state and wear a diaper while clinging on to dear life, the way my mother did. I did a performance on this topic. This is why I’m looking into the possibility of dying with dignity.

Have you ever considered getting ‘work done’ on your body in some way?

Never. I don’t even shave my legs or wear a bra. In my performances, you can see that I don’t remove my pubic hair either. I’ve always viewed the body as a living sculpture, and I’m interested in natural transformations over time. This is how I created the performanced “I am 40”, “I am 50”, “I am 60”, and I plan to do “I am 70” as well.

“I was and still am a provocateur.”

Corporeality and sexuality are common topics in your work. Is it easier to talk about them in Croatia today, than it was before?

These are still taboo topics. For example, a young curator recently whispered to me: “You know, I’m on my period,” and I asked her why she was whispering. When I first got my period, we used gauze that we would wash. Once, I left it in a basin to soak, to make cleaning the blood easier. My father told me that I was never to do that again, and that it must never be known when I was menstruating. I was appalled, because I didn’t understand why something so natural should be kept quiet. But it didn’t influence me. I didn’t start being ashamed of my body because of it.

For the last two years, you’ve performed the piece “A Right to an Orgasm after 60”. Why do we find this notion of sexuality in older people so repulsive?

Many think that seniors have no sexual needs and that women over 40 shouldn’t think about sex. Not to mention women over 60. This is why I’ve tackled sexuality in older generations, because it’s an entirely neglected topic. I deliberately perform this piece not in galleries, but in storefronts and public places. It ended up being the most accepted performance of my career. I performed it for the first time in Vienna, and when people reacted well to it, I decided to continue performing it.

Do sexuality and orgasm change with age?

My sexuality has not changed much since my younger days. I still have fantasies and I don’t intend to stop fantasising. The intensity of the need for sex is weaker, but the orgasm is the same.

Aren’t both society and the state trying to control a woman’s pleasure?

Women are still the ones thinking about contraceptive methods, dreading getting pregnant, and if they do, they struggle with where to get an abortion because possibilities in Croatia are getting progressively limited. All of these are ways of controlling a woman’s pleasure.

On past photos of your artistic gatherings, and on those of group exhibitions, you were usually the rare and even the only woman artist among male artists. What was your position as a young female artist in Yugoslavia?

I am very sorry there were so few female artists among us in the early 80s. The international scene had many of them. Male artists in the group encouraged me, supported me and we were equals. Despite this, many intellectuals from the Balkans still have patriarchy deeply rooted in them. To them, I was and still am a provocateur.

Has the art world and the public treated you differently than male artists? Was there a difference between what was ‘allowed’ for you and for them?

Art critics gave me a lot of support, while some female journalists greeted performances such as “Cock I Love” and “Smell My Cunt” with fury. For the conservative Croatian society at the time, this was a big step forward and they couldn’t understand how young women could condemn such a thing.

What was the extent of artistic freedom during communism, and how did it resemble that in the West?

I could have done anything I wanted. There was no censorship for my work. We created contemporary art in the same time as the rest of the world. We had galleries, famous international artists came to us, we followed the international art scene and they followed us. Yugoslavia had more freedom than any other communist country.

What is the current position of artists from the Balkans in Europe?

Communication and mobility are better today, we’re connected, but we are treated differently. For example, we can’t reach the same prices on the art market as artists from the West. We’ve been fighting this, to no avail, while some non-Western artists have already accepted this position.

For example, during the war in Croatia in the 90s, a gallery owner from Ljubljana offered me less money that he did to a Spanish performer. I was shocked and, for the first time ever, I compromised and accepted, because the situation was dire. I haven’t accepted different treatment since then. I’m represented by a Viennese gallery that hasn’t sold a single piece of my art for three years now. I don’t wish to lower the prices. Instead, I keep them at the same level as those of other western artists. If we all did this, maybe we would stop being treated as a society that can be easily taken advantage of.

What do you think is the most crucial bill to advance women’s rights on a European level?

Free and evaluable abortion is a very important right for women. But the most important would be mandatory civic education for all from an early age. Children should be taught tolerance, nonviolence and respect for others. So that when boys grow up they will not be bullies.