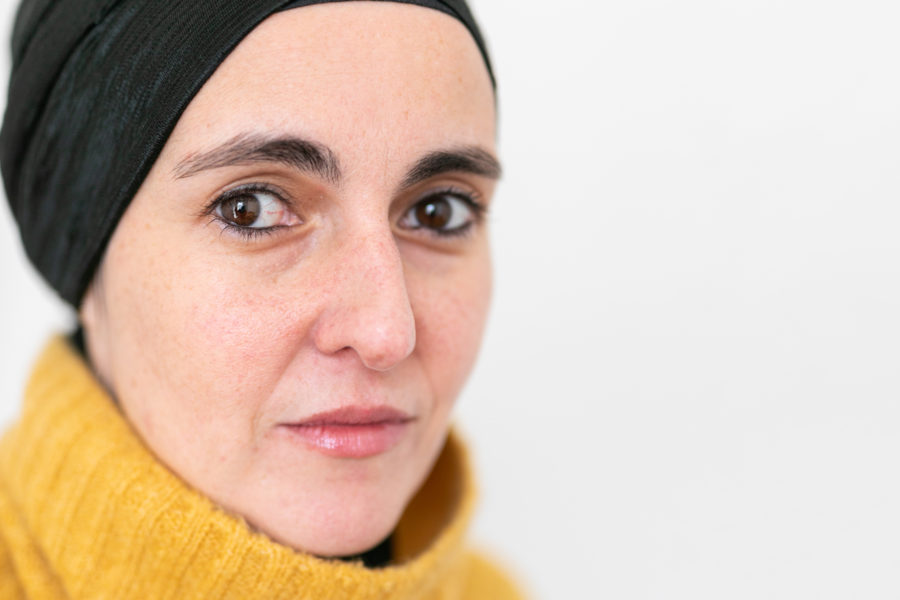 Aida Begić, 44, is an award-winning Bosnian film director and screenwriter. In her films, she deconstructs the patriarchal systems and contradictions of the post-war Balkans.

You founded the Sarajevo Academy of Performing Arts in 1993, while the city was under siege. What made you choose film as a form of artistic expression?

Since I was a child, I knew that I didn’t want to have an ordinary job. I didn’t want to have a 9 to 5 office job. I went to music school, I played piano, I loved drawing and writing. I think that directing was like a blend of all those different affinities. At first, I wanted to be a theatre director. That’s why I wanted to go to the Academy of Performing Arts. It was in the last year of my studies that I realised that the dynamics of film suited me more, and that I wanted to be a film director.

In an interview, you said that you listened to rock music and that you were a rebel when you were young. Is wearing a veil another act of rebellion for you?

I covered myself because I was in search of meaning, and I found myself in Islam. I was raised in a secular family where religion didn’t exist. My parents and even my grandparents raised me in the spirit of communism.

[I guess] it was a kind of rebellion, because everybody was against me wearing a veil, even my husband. He was afraid that everyone would think it was he who forced me to cover myself.

What was it like to study in Sarajevo during the war?

I was only 16 when the war started in Bosnia and Herzegovina. My parents didn’t want me to go to college. It was far away from our home, and there was a danger of snipers and grenades. However, I told them if they wanted me to stay sane, I had to do something. It was a strange time. There was no electricity, there was not much food, grenades were falling outside, and I was reading “A Doll’s House” by Ibsen.

‘Life can’t be lived without art.’

All that made me realise that life couldn’t be lived without art. We need art the same way we need food. When you are going through a difficult period, it’s art that keeps you alive. That’s why I keep telling people how important art is.

The younger generations in Bosnia and Herzegovina are growing up in a world that is very obscure and impoverished. Hate, fear of the other, and ethnic division is their everyday lives. Do you think that art can help them see life in a different perspective?

Culture and art have the power to connect people. In pre-war Bosnia and Herzegovina, in almost every village, there was a house of culture. People felt that they belonged to a more extended community, which is not the case today. Young people, mostly those living in small towns, have no access to culture and, therefore, no perspective. Art could enrich their lives, but the governments are always cutting budgets for culture. There is nothing left for the young generation in this country, only destruction.

There’s a common opinion that being a film director is a male profession. Despite that, there are many excellent female directors in Bosnia, like your classmate Jasmila Zbanic. Is the future of film female in Bosnia?

I belong to the first generation of female directors who emerged after the 1992 to 1995 war. When I started working, many people, even my coworkers, found it very difficult to accept the fact that a young woman could be a director. That’s why they often addressed my assistants instead of me. But, since then, many things have changed.

There is a trend of female directors that started in Bosnia and Herzegovina, and has spread to the region as well. And I’m very proud of that. It has led to many changes. First, the content of the films themselves has evolved. In the Balkans, women used to be portrayed either as mothers or as prostitutes. Finally, complex female characters have emerged as stories told from a female perspective. Even the atmosphere on movie sets has changed. The film director was seen as some kind of supreme being, who has the right to scream at you, to be cruel. Luckily, this trend has disappeared with the advent of female film directors. So, yes, I think the future of film in our country is definitely female.

Your films talk about post-war Bosnia, and mostly about problems that children and women are facing in this country. How do you choose your topics?

I admire women who live in small communities in Bosnia and Herzegovina. They have survived so many tragedies during the war, and still, they [managed to] remain human and sane. I see tremendous strength in them, and the potential for a better future. That’s why I choose to make movies about them.

My third film, “Never Leave Me,” talks about Syrian children refugees in Turkey. I needed to make a film about refugees, from the perspective of Bosnians, who had a similar experience. This movie is part of a trilogy that deals with the suffering of women and children. They are the biggest victims of conflict in any war.

You are currently working on an entirely different movie.

I wanted to make a movie based on the love stories of women in Bosnia and Herzegovina. This country can be horrible and beautiful, at the same time. I will try to portray that absurdity that will hopefully be humorous too. We’re going to start filming in April, and by the end of the year we will probably finish it.

Is the duty of an artist to be socially engaged?

Of course, even if I’m not someone who necessarily will protest on the streets. I like to act within my work. I work with actors from all over Bosnia and Herzegovina, no matter where they come from. Also, I go to schools, and so with my work, I try to create bridges between young people. I think the world can change this way.

You have two children. How do you reconcile your private life and your career as a film director?

My husband is the director of photography, and we fully support each other. When I shoot a movie or travel to festivals, he babysits, and I do the same when he works. We are quite equal when it comes to this. Whenever we can, we take our children with us to film festivals. I was one of the first women fighting for the right to bring my baby to film festivals. I see that now, there are more baby programs, especially for the festival participants.

This is the type of question that a journalist will never ask a man.

It’s true. Usually, a man has a wife at home who takes care of the house and their children.

“A woman’s body is always considered to be someone else’s problem.”

What is the biggest issue women in Bosnia and Herzegovina are facing?

Bosnia and Herzegovina, and even the entire region, is a very patriarchal society. The interesting thing is that the women themselves are maintaining the patriarchal system. That was also the theme of my films. In my movie “Snow”, I deal with the relationship of women in a small Bosnian village, which, even though there are no more men left alive after the war, they still maintain these patriarchal ways of life.

The other problem is a common opinion that a woman is guilty of everything. If the family falls apart, it’s the woman’s fault. Domestic violence is also her fault, as well as rape. In our country, especially in small towns, men often suffer from PTPS syndrome and women are the ones who take care of everything. They work, they run the household, but again there is a patriarchal code inside the house. Paradoxically, women in Bosnia and Herzegovina are both very emancipated and very oppressed.

Do you feel European?

I do feel European. Europe is the most beautiful continent and the most pleasant place for life. And Bosnia and Herzegovina is definitely a part of Europe, as its most exceptional example of different cultures coexisting.

You wear a veil. In Europe, the veil is often associated with a woman being oppressed. Have you ever experienced any prejudice?

I am sure there are many veiled women who are oppressed. The same thing goes for women who are not veiled. It bothers me that all veiled women are being put in the same basket. There is always an opinion that we are uneducated and exploited. This opinion discriminates against a large population of women who live in Europe.

In your opinion, what would be the most crucial bill to advance women’s rights on a European level?

If a woman decides to be a mother, she should be entitled by law to have a fully paid maternity leave as long as she finds it necessary. This also means that she doesn’t have to fear that she will lose a job when she returns from her maternity leave. There is also a problem of domestic violence, especially in the Balkans. The legislation should punish the perpetrators more severely.

Don’t you think that women are always judged for whatever they do? They are judged because they are wearing a skirt that is too short or because they decided to veil themselves.

A woman’s body is always considered to be someone else’s problem; either society or family members who are thinking they are entitled to it.

Would you call yourself a feminist?

Yes, I am feminist. And I should say that thanks to one militant feminist, who was looking for a female film director to shoot a documentary film about women in politics. I met Amra Baksic-Camo, a famous regional producer. She later worked with me on my very first movie, “The First Death Experience,” which was screened at the Cannes Film Festival.

Are islam and feminism compatible?

Islam brought significant rights to women. Women obtained the right to own personal property, without being obliged to share it with their husbands. Women were granted the right to ask for a divorce. Islam and feminism are not in conflict, but the problem arises when some men interpret Islam in a corrupt and wrong way, and take things out of context.

Did #MeToo arrive in Bosnia and Herzegovina?

I am actively fighting for equality in the world of cinema. I recently watched the “Bombshell” movie by Jay Roach, and this creepy attitude towards women shocked me. That was also what used to happen here, until recently. It goes without saying that, if you were young and beautiful, your employer would have had the right to abuse you in any which way. It’s time to put an end to this injustice. Although the situation in cinema and culture in general in Bosnia and Herzegovina is very positive, we definitely need the #MeToo movement in other segments of our society.