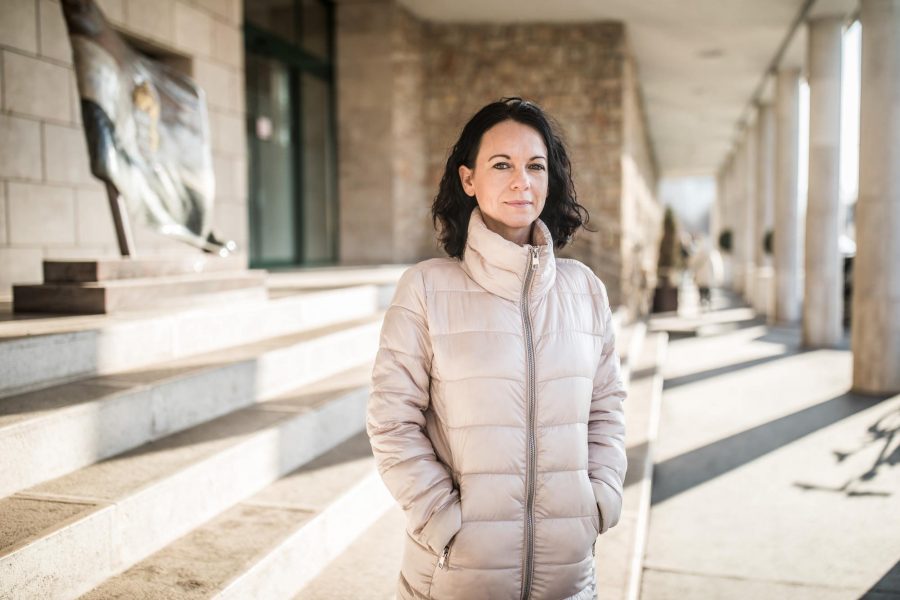 Tímea Szabó, 43, was a journalist and humanitarian worker before making her way into politics. She is now an MP and co-president of Dialogue for Hungary, an opposition party fighting against Viktor Orbán’s authoritarian regime.

18 January 1976: Tímea is born in Budapest.
2001: She works throughout a year and a half in Pakistan and Afghanistan.
2009: Becomes a candidate of the LMP (green party) for European elections.
2010: She is elected as a member of parliament for Dialogue for Hungary, and re-elected in 2014 in Budapest’s 3rd district.
2018: She gives birth to her second son.

HISTORY OF WOMEN’S RIGHTS IN HUNGARY

1945: Full suffrage right for all women.
1957: Abortion is made fully legal but restricted again in 1973.
1985: “Gyed”, a child allowance is introduced. Currently one of the two parents staying at home can receive up to 70% of his or her salary (maximum twice the minimum salary) until the child is 2 years old and provided the parent was working before.
1991: The abortion debate arises again but abortion is kept legal, it’s now allowed until 12 weeks and under certain medical circumstances up to 20 weeks of the embryo’s life.
November 2019: A national consultation on families in launched by Viktor Orbán

What did you career look like before you entered politics?

I started as a correspondent in Hungary for Bloomberg News and British and American newspapers in 1995. Then, in early 2001, I joined Harvard University where I was doing research on conflict prevention strategies and the protection of vulnerable people, primarily for the UNDPA. I later travelled to Pakistan and Afghanistan to help the International Rescue Committee and Care International with refugee and human rights issues. Upon returning to Hungary, I joined the Helsinki Committee [a Hungarian NGO that provides free legal aid to asylum seekers]. When things got intense in Hungary with the 2006 protests, I started feeling as though I should participate more actively so in 2008, I joined what later became a green political party called LMP.

All of my past experiences helped me understand what’s important in life and how I can contribute to make the world a better place. Now that I have two children, I’m planning on staying here and shaping my country’s future.

What did your time in Afghanistan and Pakistan teach you?

I saw how hard people were working to liberate and rebuild their country. Afghans understood that they can only rely on themselves, not on external help. They’ve been knocked down so many times, but they never gave up. That was very inspiring.

Did you have role models while growing up?

No. I find goals more interesting than role models. Having a democracy and rule of law doesn’t cut it if you don’t have equality. Massive inequality directly led to Orban’s regime.

“In Hungary the word “feminism” still has a negative connotation.”

Has your mum or other women in your family influenced you? Are they proud of you?

My mum is one of the most generous people I know. She is by no means active politically, but I believe that I got my devotion of helping others from her. She’s very proud of me but she’s also worried because she sees what Orban does to his opponents.

How much space does politics take up in your life?

It’s definitely not a 9 to 5 job! Even when I’m with my family people stop me on the streets. You need to be committed, it’s a lifestyle. I’ve thought about quitting a few times, but I couldn’t watch my country go down the loo because of a dictator. I had to do everything I could to create a better life for my kids.

Would you say you’re a feminist?

I am. In Hungary the word “feminism” still has a negative connotation, though. Conservatives tend to associate it with single women who can’t get a boyfriend, so we still have a lot of work to do. Following the December protests [against the new labour law], female opposition politicians formed a group called the White Hats referring to a protest where we all wore a white hat symbolising peace. Now with this group we’re trying to get women’s voices heard.

Was #MeToo a milestone for you? How did it impact Hungary?

A lot of women were affected by the #MeToo movement in Hungary. It was the first time many of them spoke out about past harassment experiences. Domestic violence is still a big issue here; a woman dies every week and a child every month because of it.

Were Hungarian women freer under communism?

I was only a child at the time so I don’t have [much of a] personal experience, but we know how the system worked back then. On one hand, women were encouraged to work. But society as a whole was oppressed, so neither men nor women were really free.

How do you manage being a mother of two children and a member of parliament at the same time?

It takes a lot of juggling for sure but my husband helps a lot. My family is my priority so always I make sure I have enough time for them. Sometimes I work after I put my kids to bed, or I take my 6-month-old baby to my office where we have lots of toys and a crib as well. My colleagues love looking after him, so I have several babysitters. I still breastfeed him so I don’t want to be away for too long. We can’t take children into the plenary room of parliament and that can be difficult. It’s quite medieval considering that MEPs in Brussels can breastfeed their babies during a plenary session.

“If we look for enemies instead of educating society, we will never succeed.”

Were you ever a victim of sexism at the Hungarian parliament?

Yes, quite a few times. While working on a child poverty solution, Peter Harrach [leader of the Christian-democrat party] blew me a kiss when he ran out of reasons for opposing the initiative. [Another time], I put my first child to sleep and attended a parliamentary debate at night. A Fidesz MP told me that a good mother should be home this time of day…

Launching his latest consultation on families, Orban said he wants to “sign a pact” with Hungarian women. What is that about?

Fidesz has been seriously concerned about the country’s demographic trends, there are simply not enough children being born in Hungary. Orban came up with this idea of a pact for women, but he doesn’t understand that it’s not about whether you want children or not – it’s about whether you can have them. There aren’t enough benefits, like flexible hours or remote working, for the needs of young mothers to be accommodated. Women bearing children often lose their jobs even though they’re supposed to be protected. Low wages are also a problem, as well as the lack of adequate daycare. You can’t introduce measures that only help the top 10% while those in need are cut out.

There are only 11.6% of female MPs. Are you for mandatory quotas?

Politics in Hungary is still a very macho thing. Orban has stressed many times that “ladies” could not take the stress it induces, so [us women] shouldn’t have political ambitions. I told him that I’m absolutely sure he couldn’t stay awake all night feeding a baby, keeping a family together 24 hours a day and carry out the political work we do. But unfortunately, this macho and arrogant attitude keeps many talented women away from politics.

I think that quotas could help. Still, they aren’t the goal but rather a means to educate a society in considering women for important positions.

In your eyes, what would be the most important legislation change at an EU-level to improve women’s conditions?

The most important task for the Hungarian government right now would be to ratify the Istanbul Convention, unveiling and doing away with violence against women. The Orban government has been denying the ratification. They just don’t want to do it and we don’t understand why. The Hungarian police still consider domestic violence as a domestic issue.

What motivates you to keep going?

My children. I want my two sons to grow up in a free country with solidarity and social justice.

What’s more difficult in your opinion: politics or being a mum?

Being a mum is the most wonderful thing in my life. Politics is not.

Who are women’s biggest enemies: men, institutions or themselves?

Neither. No one is the enemy of women on purpose. It’s outdated systems, mentalities and traditions that we need to change. Old privileges need to be dismantled. If we look for enemies instead of educating society, we will never succeed.