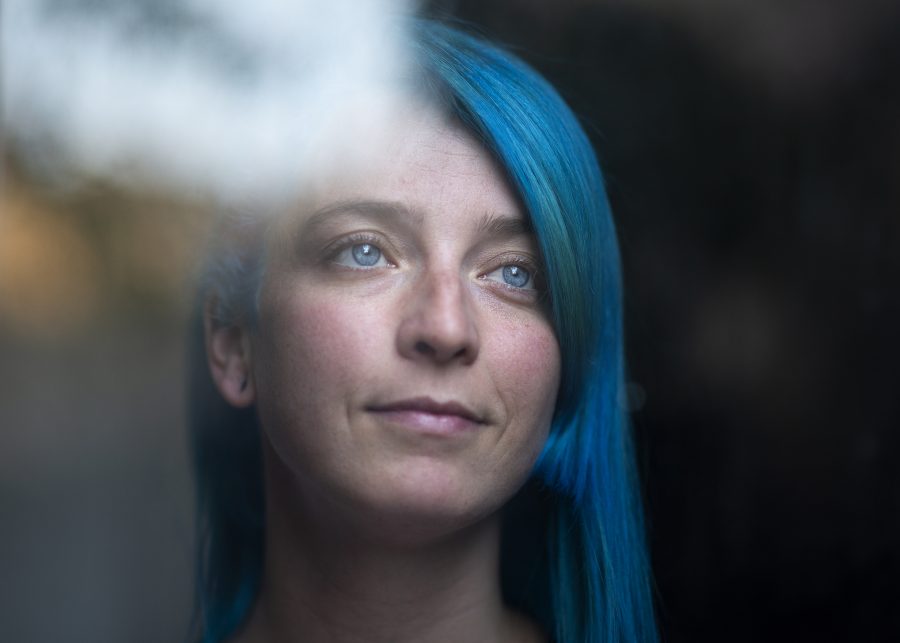 Anabel Montes Mier, 32, is a lifeguard working for the Spanish NGO Open Arms, devoted to search and rescue at sea. Nicknamed the ‘girl with the blue hair’, she was slapped with criminal charges for helping refugees. Despite this, she insists on the importance of civil disobedience and sisterhood.

When you were little, who were your role models?

I come from a very small town in northern Spain, in a rural area. My grandmother was definitely [a role model] and has always been, because she taught me resilience and how to be strong. Later, when I was growing up and began swimming, I had sports personalities as role models, like the great swimmer Nina Zhivanevskaya. She was someone I would look up to and say: “I would like to do what she does. Maybe I can.”

And what did you want to be?

It’s funny because when I was little, my father was a light-aircraft pilot. So for a long time, I wanted to be a pilot in the armed forces. Now when I think back on it, I say: “What?” Then I wanted to become an archeologist, because I love history. I actually went on to study ancient history at university. But university took away my passion for history. My asking questions all the time wasn’t well-received, they told me I was too critical. I still buy history magazines, though.

You’ve worked for Open Arms, the Spanish NGO that rescues refugees in the Mediterranean Sea, for four years now. Why did you decide to join?

Also, when my grandfather died, it was my first real and terribly painful loss, that made me aware of the value of the present; to say the things when I want and when I can, and to do the things when I have the opportunity. Because one day it will all be over and time is the only thing that doesn’t come back.

What do you like most about your job? What’s the hardest part?

I have a job that I really like. I’m aware that it’s a privilege and a luxury to be able to say that, because there are so many people in the world who work wherever they can just to survive.

The hardest part is obviously that the job exists [in the first place] because people are suffering. This is the contradiction for everyone who has a job in emergency-related work. What makes it even harder to save refugees at sea is that they come from a situation where they’re forced to risk their lives. They didn’t have the option to decide whether to be there or not, contrary to someone on a beach holiday.

You’ve saved many refugees. You see their struggles, their pain, their worries and their joy when they survive. What else do you see in them?

I see hope, a lot of hope, which is wonderful because that’s what has gotten them this far. But it’s also complicated. That hope has a double edge to it. They will tell you: “I want to do this, I’m going to do that, my dream is such and such.” But you know that most of them won’t be able to fulfil their dreams, and some of them will even be deported. But who am I to take away that hope?

On the other hand, I don’t want to give them too much hope either. I know what awaits them. When we take them out of the water, they often spend a few days on the ship until we bring them to a port. They have a few days of peace, where they ask us for advice and express their hopes. Hope is often the only thing that keeps them alive, but it also makes them suffer.

Do you see a difference when it comes to female refugees?

Absolutely. All of the refugees have suffered, regardless of whether they are women or not. [Women], in the first place, already suffer from being forced to flee. But then comes the trafficking, torture and rapes. Men are also raped, but the things women face just because they are women, is outrageous. Machism is visible in any society, to different degrees. Some women flee just because they’re women, escaping things like female circumcision for example. Many girls come from places along the Ivory Coast. Some of them are only 10 years old and travelling alone, running from family members who want to circumcise them. Obviously there are systemic reasons for fleeing that are inextricably linked to gender. In our experience [in Open Arms], it’s safe to say that 100% of the female refugees have been raped at least once. Some women become pregnant after being raped. Some women bear the children of their rape. How can this be addressed once they reach the shore? Usually it’s not addressed. There’s a lot of talk about physical damage, but what about the psychological damage?

How has your work for the past four years changed you as a person? As a woman? As a citizen?

It has made me calm, serene. Since I was little, I’ve always been a very intense person – strong, hard and intense in everything [I do]. When I was confronted with the world refugees came from, which was so different to my own, it was like a mirror was being held up to my face and I felt as though my world was a farce. I fell into a very dark place and it took me a long time to get out. I was totally apathetic, I felt nothing for a long time. I neither cried nor laughed. I was an [empty] shell and nothing else. My trauma was nothing compared to what happened to the people we help. I was slowly able to rebuild my walls, which became stronger, harder, more aware and calmer. It’s a bit like finding your place in the world, knowing what you want and what you don’t.

“100% of the female refugees have been raped at least once.”

How do you recover when you feel so low?

In my life I learned that, as a woman, you just keep it all inside. And as a Christian, it’s all your own fault, mea culpa. So [eventually] everything comes out and you remove all the layers, like an onion, until you get to a point where you’re at ease. As humans, we always want more. We say we’ll be happy, but only once we have this or that. We actually don’t need anything. When you’re fine with yourself, how you are, where you are, everything else is fine. I think that it’s about being aware and being thankful. Suddenly, everything starts working out. But it’s not that everything is going well, it’s you who is well.

What’s the biggest challenge you’ve had to face? In your work, as a woman?

The biggest challenge I’ve had to face is precisely [that], being a woman. I work both in emergency rescue and the maritime industry. The latter has been a world of men. They used to say that having a woman aboard a ship brought bad luck. What’s more, I frequently come into contact with authorities, the military and the police in my work. To them, I’m known as ‘the girl with blue hair’. So my biggest “handicap” is being a woman. I’ve had to strike the table with my fist or shout just to be heard, in situations where my male colleagues wouldn’t have to, just because they’re men.

Also, working for Open Arms has changed me in the sense that the bubble of reality I had around me exploded and I became aware of everything. In fact, I am still in that opening of constant awareness, from the first time I saw people with their whole lives packed in a wet backpack; from the first time I looked death in the eyes until it unfortunately became something normal; from being publicly and legally criminalised for helping people – seeing that selfishness and cruelty have no limits. Just like hope and the love of life.

Spain’s dictatorship ended 40 years ago. How has that affected your life as a young woman growing up in a young democracy?

I obviously didn’t realise it growing up, but I do now as an adult. First of all, it was a false transition to democracy. Many of the new democratic leaders were related to leaders in General Franco’s dictatorship. So consequences of the dictatorship were still present when I was growing up in the 80s and 90s.

“Spain’s transition from a dictatorship to a democracy was never really completed.”

I was always the rebel at school. It was a school run by nuns, but I wasn’t a bad girl. Still, I was always seen as the bad girl, because I didn’t fit the studious prototype who would get straight As, who kept quiet and held her head down. I was born after the end of the dictatorship, but my whole generation was educated with limitations, especially when it came to women’s rights. It has taken us time to catch up with the rest of Europe, and we’re still behind in some aspects. [The dictatorship] had strong social consequences. Both my grandmothers and my mother worked hard at home and in the field their whole lives, but never got paid for it. My family weren’t machos, it was just because that’s how things were.

In your opinion, what is the biggest issue women in Spain are facing today, regarding their rights?

I don’t think it’s fair to speak about women and the issues they face in general in Spain, or anywhere else for that matter. There are so many distinctions between us. I fight for my rights from the position I’m in, but I can’t ask a woman who is still fighting against being forced into marriage to fight for the same rights. Still, we must, as women, support each other in our fights. Feminism is a sisterhood between women, where objectives and struggles are different, but all of them legitimate.

How do you feel about the rise of the far-right in Spain these last few elections? How do you think it could affect women?

I have to admit that it didn’t surprise me. Spain’s transition from a dictatorship to a democracy was never really completed. The far-right has given a voice to many people who used to feel that hate speech was taboo. [Those things] were only said at home, but now [hate speech] has been institutionally legitimised. Once fascism and racism is legitimised on a social and political level, nothing can stop it. It scares me because we’re looking for someone to blame for our misery, and we often turn to those who can’t defend themselves. And then there’s the polarisation. There have never been as many feminist demonstrations in Spain as there are now, but anti-feminist hate speech is also on the rise.

What does being European mean to you? Do you feel European?

Patriotism is not something I feel strongly about. I don’t identify myself as being European. But at the same time, I’m perfectly aware that I’m a white woman living in Europe, and that in itself gives me a lot of privilege. I have the privilege of having been able to study what I wanted, move to another country if I wanted to, travel where I’d like with my passport… I have absolute free movement.

I don’t really think that Europe has a migration policy. Europe is just putting up an invisible border, and only letting those in who have a certain professional profile, so they can help raise the economy of [the state they go to]. It’s more like an economic policy based on people.

In your opinion, what would a fundamental law to improve women’s rights look like in today’s Europe?