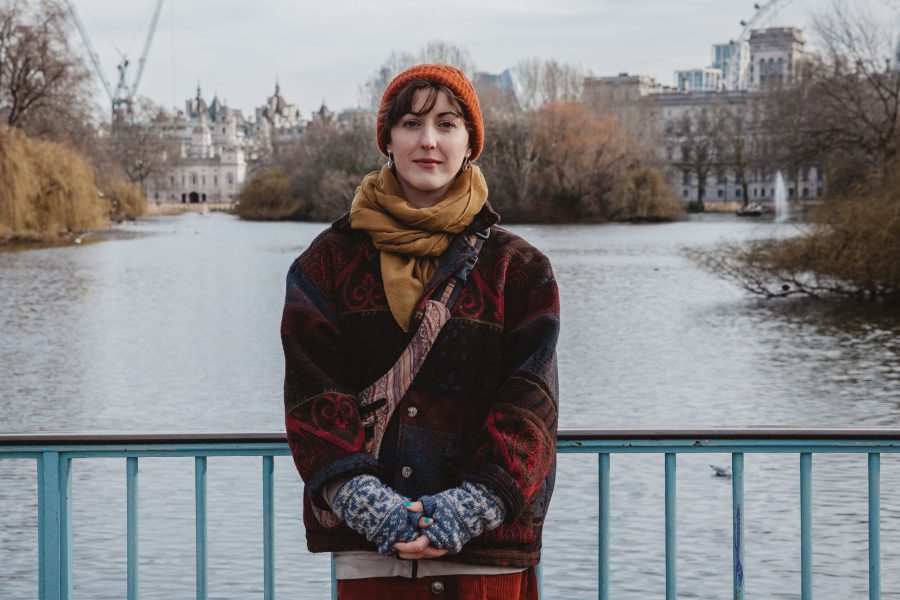 UK singer and songwriter Blythe Pepino, 33, has decided not to have children in protest of the climate breakdown and civilisation collapse. In 2019 she created BirthStrike, a campaign group where people come together to discuss population, racism and sexism around birth in solidarity.

Could you describe what the BirthStrike movement is?

BirthStrike is a group of people, all ages, all genders, who are raising the alarm about the severity of the ecological crisis. We are calling for a systematic change by speaking up about our reproductive choices, and how those have been affected by the advent of the climate breakdown. We’re able to talk about something that is generally quite a taboo subject, and has a lot of emotional repercussions.

Why is reproductive choice such a taboo subject?

We still live in a very patriarchal society. We’re taught from a very young age that having children is the norm for any woman. It somehow fulfills her role in life. There’s also this emphasis on producing your own child, your own progeny, and that’s very much woven into our patriarchal history as well. There’s a lot of sexism around [having a kid], and there’s a lot of racism around it too. The underlying racism being that women need to produce babies to continue themselves and their tribe. If they forgo doing that, then they’re letting down society by not producing people of their type and thinking. It’s also taboo within families, because there’s a sense that you’re letting the family down somehow. Children embody this idea of continued life. To go against that is somehow immediately seen as quite negative and misanthropic.

Personally, what made you start the BirthStrike group?

It all happened at the right and the wrong time. When I met my current partner, it was the first time I felt emotionally ready [with the idea of motherhood]. I got to a point in my life where I felt stable enough to be able to love in that way, and to embrace that idea of commitment and sacrifice. Then I learned about the IPCC [Intergovernmental Panel on Climate Change] reports. I was reading Naomi Klein’s book “This Changes Everything: Capitalism vs. The Climate”. I came across Extinction Rebellion, went to one of their lectures [NB. Blythe is part of the Extinction Rebellion movement and was arrested in November 2019]. Greta Thunberg definitely inspired me.

I felt like there was a real failure of our systems and our government, that they weren’t telling us the truth about what was happening. Taking the decision [to birth strike] was emotional, but it didn’t feel like I had much of a choice. I thought: “Maybe using this decision, which seems so wrong and so powerful, will force people to realise what’s going on. If there are other people [who feel the same], then we can join together and create a campaign.”

My mum was very upset. She was really looking forward to me having a kid. But whether you see our decision as extreme or worrying is very much dependent on how much you know about the climate crisis. Today, the BirthStrike movement is much more rooted in social justice and accepting that things are going to change. When shit hits the fan, which it’s already doing, we need to react in a way that isn’t horrific and violent.

Were you surprised to see how many women felt the same?

No, I wasn’t surprised to know that lots of women were troubled by this idea. But I was surprised to see how many people were willing to make such a strong political statement about it publicly.

What worries you about the BirthStrike group? Where do you feel tension?

When I started BirthStrike, I was aware of the issue of population, but not to the extent that I am now. BirthStrike has made me realise that the topic of birth is strongly associated with a longstanding fear about human numbers. Most people, regardless of what I say and how I say it, receive BirthStrike as a strike on birth rather than a strike from birth. I don’t think I’ve ever been able to have an interview where people haven’t talked about not having children as a way of saving the planet. People assume that we’re trying to advocate not having kids, that we see it as a solution. That’s not what we’re doing at all. There’s no advocacy. It’s a bit like a bus driver who strikes because he doesn’t like the conditions within which he’s having to drive his bus. It doesn’t mean he wants to give up his job. He likes his job.

How do you feel that our notion of mothering and motherhood has changed over time?

Ultimately, I think not much has changed. But the things that have changed is people’s perception of what motherhood is. My friends are pretty much doing the same thing as they would have done 30 years ago. But they’re finding they have more support from their partners. They’re aware of the engendered aspect of motherhood and they’re trying to do things to shift that. But when it comes to mothering, the woman still carries the babies. The woman still nurses the baby. There’s still that natural imbalance. I think what women are finding is that you can think about it differently, but physically, there’s an imbalance. For the first few years anyway.

That said, I’m also really aware of lesbian friends of mine who’ve been trying to go through very modern styles of motherhood and have given up, because they’ve decided to put their mothering into their dogs, their careers… There’s a whole movement towards realising what motherhood is and recognising that there’s other places we can put that.

“You can be a feminist and be sexist.”

How would you say you’re mothering today? Where are you putting it?

I think it goes everywhere. Once you have that concept, it’s a really beautiful thing. Everywhere I go, I feel I’m bringing that nurturing aspect. Or I try to anyway. That’s something that people talk about when they have a kid. It makes them think about what’s important. Even when you’re birth striking, you’re considering that.

With contraception, abortion, ovary freezing, in-vitro technologies, women have more of a choice whether or not to have children. Do you agree with this?

I think that choice is always a good thing. Especially around birth, the more choice there is, the better. There are some unhealthy attachments to the idea of having your own child. Everyone should just decide what they want to do and have a choice.

Do you feel like women in the UK are more reluctant to having children than before?

Yeah. I think they’re more guarded about their independence, and more aware of the negativities of motherhood. People are being more honest. Mums are being honest about how it can wreck your body, it can wreck your sex life and it can be really hard. I don’t really think we were ever allowed to talk about that before. So that’s good, because it means that when people do make that decision, they’re making it in an informed way. Women are also delaying having children. People are having babies a lot later, and turning to adoption more too.

How do you feel about the current state of feminism in Europe and the UK?

Caveat: I think that my mother issues has resulted in me coming quite late to feminist academia and research. But from what I’ve seen, European feminism really needs to recognise its colonial history. It needs to be willing to be constantly aware of that history, and how it has given certain women in Europe privilege over other women. I’d like to see that more highlighted and not seen as a threat.

What does being European mean to you?

For me, it means being educated with a level of arrogance and privilege. An expectation of domination over people. Almost like you’re the centre of the universe, especially in the UK. It also means a level of diversity, because I think that a lot of people from all over the world come to Europe to find a better life [NB. Blythe worked in Calais with Help Refugees]. Especially if you’re in the kind of cosmopolitan cities, there’s a big level of diversity. But I don’t know whether that’s more so than in other continents.

Would you call yourself a feminist? Why?

Yes, I would. Because I believe in equality between the genders. I come about feminism from that perspective, even though occasionally I wish that we could just control all the men and there would be lots of women in power because I think it would be great [laughs].

What impact do you feel the #MeToo movement had on men?

Huge. I think it’s had a huge impact on everyone. It’s really helped with this idea of believing women, and moving away from this idea of women being hysterical, attention-seeking personas. I think it’s made men aware that there are serious consequences to their actions. It’s sad that it’s come to that in order to force people to behave well. But if that’s what it takes, then that’s what it takes.

What are some of the most pressing issues UK women are facing today?

I think for a lot of women, austerity and poverty is a big one. There have been lots of cuts to welfare, and that’s disproportionally affected women, the elderly and children. Women, who are often the caregivers of the family, will be getting hit from all sides by austerity.

There’s also a massive issue with people with asylum seeking status and refugee status who are just left for years without any recourse to having any kind of life. Now with Boris Johnson in government and people like Priti Patel in charge, it means that rights are going to be taken away.

Do you have an opinion on Brexit?

Overall, I think it’s a very anti-immigration based situation. And I think that people don’t really want to recognise that. It’s very sad, because I don’t think people are going to get what they hoped out of Brexit.

What would a fundamental law to improve women’s rights look like?

One of the things that is really overlooked is how men are brought up. Everybody [should have] to experience looking after either elderly people, or people with mental health problems, destitute people, in the same way as you would draft people into the army. There should be a draft community service. I think that one of the things that really undermines the growth of women’s rights, and people’s rights in general, is that elites and men don’t have enough of an experience of care. They don’t understand it. They’ve never had to do it.They really have no concept of what that is, except that it belongs to somebody else. Even with my really good feminist male friends. They don’t know how to clean a toilet because their mums have done it their whole lives. That’s really central [laughs].